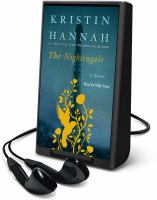 General Note
Unabridged.
General Note
One set of earphones and one AAA battery required for listening.
General Note
Title from Playaway label.
General Note
Release date supplied by publisher.
General Note
Previously released by Macmillan Audio.
General Note
Issued on Playaway, a dedicated audio media player.
Participants/Performers
Narrator: Polly Stone.
Description
FRANCE, 1939 In the quiet village of Carriveau, Vianne Mauriac says goodbye to her husband, Antoine, as he heads for the Front. She doesn't believe that the Nazis will invade France...but invade they do, in droves of marching soldiers, in caravans of trucks and tanks, in planes that fill the skies and drop bombs upon the innocent. When a German captain requisitions Vianne's home, she and her daughter must live with the enemy or lose everything. Without food or money or hope, as danger escalates all around them, she is forced to make one impossible choice after another to keep her family alive. Vianne's sister, Isabelle, is a rebellious eighteen-year-old girl, searching for purpose with all the reckless passion of youth. While thousands of Parisians march into the unknown terrors of war, she meets Gï¿½etan, a partisan who believes the French can fight the Nazis from within France, and she falls in love as only the young can completely. But when he betrays her, Isabelle joins the Resistance and never looks back, risking her life time and again to save others --,provided by Macmillan Audio publisher.
Similar Series From NoveList
Similar Titles From NoveList
Similar Authors From NoveList
Borrower Reviews
Published Reviews
Reviews from GoodReads
Loading GoodReads Reviews.
Citations
APA Citation (style guide)