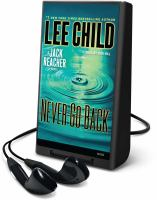 General Note
Title from Playaway label.
General Note
Random House Audio--Container.
General Note
HDAUDIO.
General Note
A Jack Reacher novel--Container.
General Note
Release date supplied by publisher.
General Note
Previously released by Random House, Inc., ℗2013.
General Note
Issued on Playaway, a dedicated audio media player.
General Note
One set of earphones and one AAA battery required for listening.
Participants/Performers
Read by Dick Hill.
Description
Former military cop Jack Reacher makes it all the way from snowbound South Dakota to his destination in northeastern Virginia, near Washington, D.C.: the headquarters of his old unit, the 110th MP. The old stone building is the closest thing to a home he ever had. Reacher is there to meet--in person--the new commanding officer, Major Susan Turner, so far just a warm, intriguing voice on the phone. But it isn't Turner behind the CO's desk. And Reacher is hit with two pieces of shocking news, one with serious criminal consequences, and one too personal to even think about. When threatened, you can run or fight. Reacher fights, aiming to find Turner and clear his name, barely a step ahead of the army, and the FBI, and the D.C. Metro police, and four unidentified thugs. Combining an intricate puzzle of a plot and an exciting chase for truth and justice, Lee Child puts Reacher through his paces--and makes him question who he is, what he's done, and the very future of his untethered life on the open road.
Similar Series From NoveList
Similar Titles From NoveList
Similar Authors From NoveList
Borrower Reviews
Published Reviews
Reviews from GoodReads
Loading GoodReads Reviews.
Citations
APA Citation (style guide)

Note! Citation formats are based on standards as of July 2010. Citations contain only title, author, edition, publisher, and year published. Citations should be used as a guideline and should be double checked for accuracy.
Staff View
Loading Staff View.
Powered By Aspen Discovery supported by ByWater Solutions
v. 20.18.00
CONNECT WITH US